Single and Sweet? or Awfully Attached?

Greetings all!  I pray that your spring has been filled with nothing but blessings and sheer happiness.  For those of you who check out my posts regularly, I am eternally grateful and always eager to hear your insight on my insight.  With that being said, as my spring has been filled with new experiences, the same relationship status lingers….simply single.  There has been virtually no interesting prospects and the threat of my status changing is no where in sight however I am continuously optimistic and having an awesome time with life in general.  My work is great, my family is well and my friends continue to fill my life with delight.  In fact, one friend presented the topic that I choose to discuss today….  Why is it that so many people act like they’re afraid of being single?  Why is it that being single is deemed as such a tragedy while we witness so many people who are attached and they are anything but happy?

So today, I choose to elaborate and ask, would you rather be single and happy or unhappily attached?  Unfortunately, in many situations, this is the reality that one is faced with.  You either learn to blissfully get along alone or you keep someone in the slot just to have someone there but you’re not happy with that person for the larger sense. Let’s explore this.

Pros and Cons of Being Single

There’s good and bad in everything, but honestly I cannot find more cons for being single because for me, it’s sweet.  Yeah, I get lonely at times and sometimes I have those days when I say “God where is he, where is my Dwayne, where is my Darius, where is my Lance?” and the stereotypical black male archetypes continue but at the same time, my weekends can be summarized as two day adventures with some of the dopest people that God has ever put on this planet and I don’t have to answer to a damn soul as to why I spend more time with all of my guy friends or who was singing next to me on the Trap Karaoke video.  Also, there are those times when I just want to lie in the bed and do nothing and the entire bed is all mine.  Yes, it’s awesome. 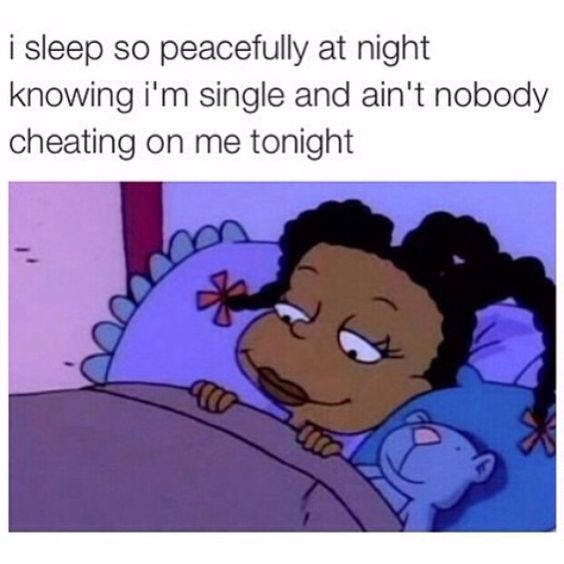 But can my life be summed up as being single or attached?  Absolutely not, it’s so much more.  A career that fulfills me, it keeps me busy, challenged and always on the go.  It’s a blessing to have a career that sends you on multiple paid trips to learn and explore.  Not only just that, I get to volunteer with my community and I have hobbies like this blog that bring so much joy to my life.  It’s sad that sometimes society reduces you to only being single or a couple and if you are single, the only thing you’re concerned about is finding someone to fill that void.  What a joke!  There is no void, when you wake up one day and discover that you’re secure within yourself, you are completely fulfilled with the gifts that God has given you

Attached and it’s Awesome… or is it Awful?

Everyone knows those couples who you genuinely admire and even are a tad bit envious of because they have a bond that exudes true bliss.  Then on the other hand, everyone knows someone who is a serial monogamist or that person who’s in a situation and you wonder why the hell they are continuing with the charade?  Let’s be honest, being attached can be scary, it’s a scary world out there.  How many times have you turned on the news and there’s a person who’s dead at the hands of their significant other?  Here in Memphis sometimes it’s like an epidemic therefore a single woman who’s careful about those that she chooses to entertain shouldn’t be regarded as a tragedy, instead she should be deemed as intelligent.  There are times when being alone is the best decision.

TVOne’s Fatal Attraction should wake up a lot of people about moving too fast in the name of “love” or in my opinion not being lonely.  That winking good looking truck driver could be the next sociopath featured on the news for targeting vulnerable women.  Truth be told we all know some people who are involved with some crazies.  How many of us know women who have these volatile and abusive relationships consistently?  Or better yet, how many of us know that man who cheats on every single woman that he’s involved with?  How can you be truly happy with someone who doesn’t respect you?  There are so many people out there who are so insecure with themselves that being without another person bothers them so that they are often plagued with deep depression if they are single for long periods of time.  I know some people who all fit into these categories and so much more.

The Couples No One Envy

No one wants to end up in either of these situations, especially when bliss is so far beyond reach with these idiots.  Why even bother?  If a person can’t compliment your life why even bother?  These are questions to situations that I just don’t understand.  However I’m sure that these serial monogamists don’t understand me either, which is why I was asked this simple yet complex question recently?

Don’t you JUST get lonely sometimes and want someone to talk to?

JUST…. After I rolled my eyes about three times, and remembered that everyone doesn’t think like me….my response to this question is this….

What if I JUST wanted someone….

And JUST wound up with anyone….

JUST wound up sleeping with anyone….

JUST end up pregnant by anyone…

JUST left alone by anyone…

JUST dealing with the aftermath… JUST because you JUST wanted someone….

This is JUST not my cup of tea… my JUST looks like this….

I JUST choose to love myself and be glad,,,,

I JUST channel my energy towards something constructive…

I JUST hang out with my friends…

I JUST stay true to myself.

I JUST remember my standards…

Being single isn’t a tragic event and it shouldn’t be treated as such no matter what stage of life someone is journeying through.  Because if it’s not real, why would you want it?

So in closing, until I meet someone worthy, someone I genuinely like, I won’t just be with anyone… I’ll just be my fabulous, single, self.

While I’m just being me, I want to reflect on how blessed I’ve been in having had and known real friendship.  God gave me a great friend, E.J., he simply didn’t look at me differently when I shunned men who were wrong for me.  He applauded me like he did in many other ways.  His friendship was a force in my life and I miss him dearly.  He was a representation of a great man and knowingly entertaining one that he would turn up his nose at would be insulting to his presence in my life.  Rest in Love E.J. and know that your spirit lives on.